Read a blog about my first gorilla trekking experience in Uganda to see how it can be. Ever since reading an article in the Swedish travel magazine Vagabond about Gorilla Trekking in Uganda I have wanted to come here and see them. I especially remember a picture illustrating the article; it was a close up of a Gorilla letting you look straight into its eyes. It became one of my travel dreams to one day get to Bwindi Impenetrable NP and see the gorillas with my own eyes.

Fast forwarding a few years to August 2012 the day had finally come when I would get to trek to see the mountain gorillas of Uganda. It was on my 4th visit to Uganda and after being in Bwindi the year before the magnificent views of the mountains and the mist creeping over them was familiar to me. The mist that sometimes makes the mountains almost invisible gives the area its nickname “the Misty Mountains”. We arrived to Bwindi the day before staying at Gorilla Mist camp to early in the morning the next day wake up for the short drive to the Gorilla trekking office.

Me and the others who would trek the Oruzogo Mountain Gorilla family that day were briefed on the rules of gorilla trekking. For example you are not allowed to get closer than 7 meters to the gorillas so as not to disturb them and as a precaution so they want contract disease from any visitors. Since the mountain gorillas share around 97% of their dna with us it is important to not visit them if feeling any illness.  After being informed about the rules we were offered a hiking stick to make the walk easier and then we climbed in to our cars to be driven to the starting point of our gorilla trek. 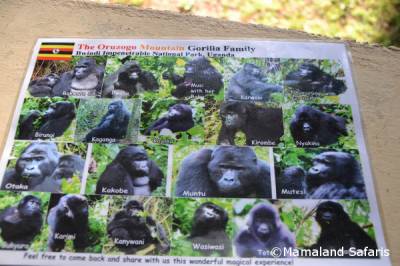 Setting off in to the forest it was a great experience in itself to walk through the jungle looking at the nature and listening to the birds. At this stage it was an easy walk since there were paths to follow and not that steep. After walking for around one hour we reached a small wetland and the guide told us that the Gorillas were on the hill on the other side of it. We were asked to be quiet and followed the guide over the wetland.  As soon as we reached a little bit up the hill I could spot my first Mountain Gorilla. It was up in one of the trees above us resting on a branch. I had a good view of it and felt that finally my longtime dream came true. After a short time we saw another gorilla, this time a young one playing in a liana, swinging back and forth.

The hike was a bit more demanding on the hill where the gorillas were, there was no path and the guide used a machete to cut the way. Despite this there was no problem to manage it and the guide was always there to help.  Continuing on we saw females with young ones on their backs, some of them quite close up. Time passed by fast and the guide told us it was time to head down the hill towards the path since we only had five minutes left of the one hour a visit is allowed to last. At this point we had not seen the silverback of the group and I was starting to think that we had missed him. 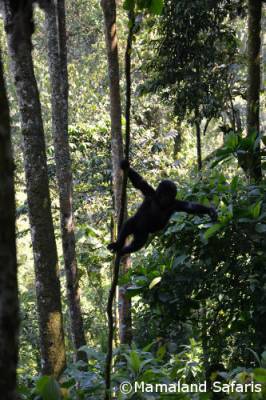 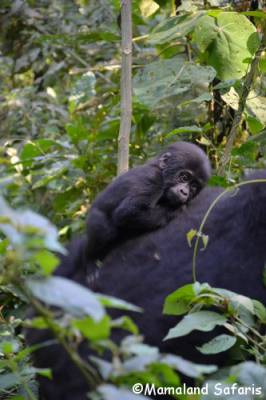 Just as we reached the path that would take us away from the gorillas the guide told us to calmly get off the path and walk a bit to the side. We could all see the explanation to this when the silverback was coming down the path with three of his females behind. The big male saw us and sat down right in front of where we were looking back at us. He didn’t seem aggressive and according to the guide it was no problem as long as we stayed back. The silverback sat still where he was until the females with babies who were behind him had passed us. Then he stood up and disappeared after them. It was an amazing experience to see the big silverback just sitting there studying us making sure his females and babies could pass. After this highlight it felt fine to leave the Gorillas to be and start our walk back.

The walk back was just as beautiful as the one leading us to the Gorillas for our gorilla trekking experience. It was a bit more challenging though since it was mostly up hill. After around half the way we had a chance to sit down and take a snack from our packed lunches. Reaching back at the car I felt that the meeting with the Mountain Gorillas had lived up to my picture of how it would be like; a wonderful experience!

TIPS FOR A GORILLA TREKKING EXPERIENCE 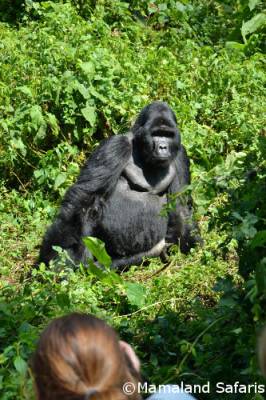 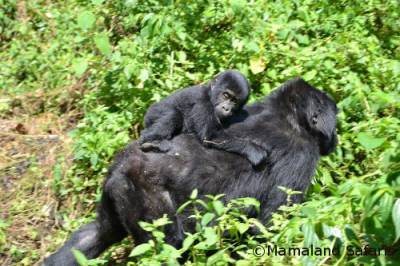 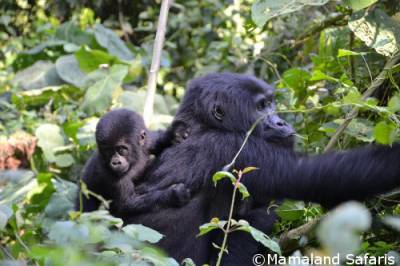 Learn more about gorilla trekking in Uganda here or take a look under safaris in the menu at the top of this page for itinerary options like a 3 days gorilla trekking safari or a 10 days uganda safari.