As a first stop on the safari for a group from Sweden was a stay at Ziwa rhino sanctuary and here comes a story from their experience.

After check-in at the guesthouse and lunch it was time for a briefing from the ranger taking us for the adventure of rhino trekking. We then set off into the terrain for what turned out to be  a very short walk. Just a few 100 meters away from the sanctuary offices we met the mother and baby rhino we were to see. The ranger had told us earlier that we were the first visitors to see baby Zawadi, who is a rhino born in June 2016. Together with his mother, the 16 year old Bella, he suddenly walked in front of us. We were told to stop and could calmly stand and study them for a long time. As they came walking towards us the ranger had us slowly walk a bit away to give them space. Rhinos have bad sight and can only see sharply 30 meters ahead, so as long as we kept a distance of at least 30 meters we were hard to detect for Bella. It was an amazing experience standing on foot looking at such an impressive animal, with its big horn, walking calmly grazing together with her baby.

After the trek we sat on the veranda of the guesthouse relaxing and had the surprise of getting to see Bella and baby Zawadi ones again. First we spotted them through some bushes walking along the edge of the garden and a little while later they came out in the garden itself. Walking calmly enjoying the grass in the other end of the garden from where we were. For a long while we could see them from the veranda. A second surprise came later as we were heading for bed. Then we heard a sound just outside the room and looked through the window. Just a few meters away was a big male rhino grazing slowly on the lawn. From the safety of the room we heard him eating and saw him walk passed. The experience at Ziwa rhino sanctuary was surpassing our expectations by far and I believe we were lucky to get such good sightings. The bonus of seeing them even after the rhino trek was over was amazing! 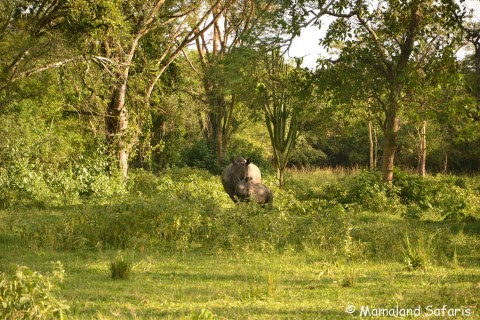 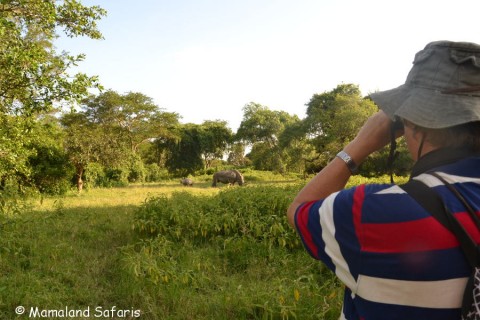 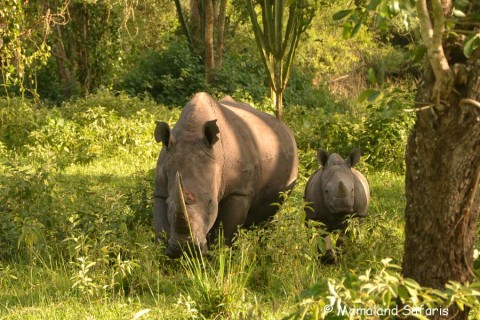 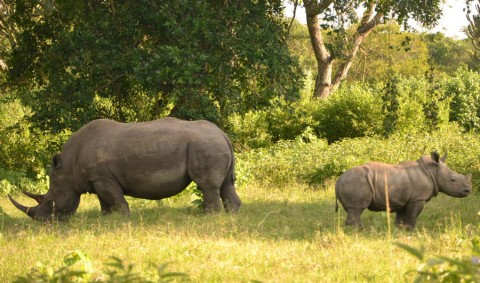 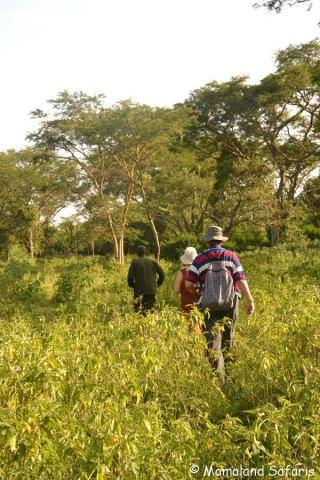 Ziwa rhino sanctuary is dedicated to reintroducing rhinos to Uganda after these fascinating species being hunted to extinction during the last century. The project is started through receiving rhinos from abroad but now the numbers are growing through rhinos being born within the sanctuary. At the moment they have 19 rhinos and are aiming at reaching 30 before they start on the challenge of placing some into the national parks, starting with Murchison Falls NP. Due to the risk of poaching this is a big challenge and we pray it will go well so that the rhinos can roam the savanna’s of Uganda ones again.